Foams are ideal for thermal management applications because they have high surface areas and can be made from materials with high thermal conductivities.

Water and air have each been used as the coolant, but virtually any fluid can be used. Because silicon carbide is extremely resistant to oxidation and corrosion, compatibility between the coolant and the foam is not a concern. 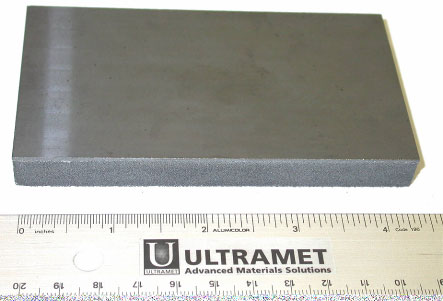 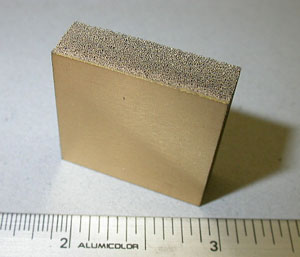 Passively cooled heat sinks employ a phase-change material (PCM) rather than flowing coolant to remove heat from the heated surface. The foam ligaments still conduct heat from the heated surface, but the heat is rejected to a stationary phase and absorbed by the latent heat of fusion of the PCM. The high thermal conductivity of the ligaments allows the heat to be uniformly distributed throughout the PCM volume, and the high surface area ensures that the thermal diffusion distance from ligament to solid PCM is always short. The open pore structure of the foam allows simple and efficient filling of the pores with the PCM.

For low temperature applications, waxes and other organic materials can be used as the PCM (melting point <212ºF [100ºC]); for extremely high temperatures, aluminum oxide (melting point 3812ºF [2100ºC]) can be used; and for temperatures between these extremes, more than 100 materials are available for the PCM. Ultramet can manufacture a high thermal conductivity system that is compatible with the PCM of interest.

An extension of the foam-based heat sink, heat exchangers are used to transfer heat from a hot fluid (liquid or gas) to a cooler fluid. The two are separated by an impermeable wall, so each experiences an environment similar to that of the actively cooled heat sinks. Because foam-based heat exchangers are compact, a smaller and less expensive unit can perform as efficiently as a larger, conventional device.

In this test at Sandia, the part was subjected to 44 shots, which ranged from 60 to 100 seconds, with the electron beam focused at the 3.8-cm length of the foam section. The heat flux varied from 2.26 MW/m2 (226 W/cm2) to 22.36 MW/m2 (2236 W/cm2), at which point the part failed. The helium removed more than 7100 W steady state from the sample at the highest heat flux. Sandia described this result as “a world-record heat flux for a helium-cooled refractory device.” The heat flux performance of the tungsten foam/tungsten tube structure was approximately five times better than that of a tungsten tube with no foam.